A New Age of Hate

After an Election Day that will most likely go down in the history books, we all expected a different outcome.  And when I say “all of us,” I mean ALL OF US…

And unless the Electoral College can pull through and actually NOT vote for him (I see this as a 5% change in happening), Donald J. Trump (you know, the guy with a fake college, allegations of rape, has filed for bankruptcy multiple times, wants to build a wall between us and Mexico, wants to ban Muslims, was not even supported by many of his party’s elected officials, but definitely supported by Putin and the KKK, which also makes him think that grabbing women by the genitals is actually ok….THAT Donald J. Trump) will be the 45th President of the United States of America, which is now officially pronounced: “Merca.”

And if I have to, I will accept that.

I APPLAUD anyone who protests in the streets against Trump’s very own hate speech which also fueled his whole campaign.  I do not, however, accept the movement of #NotMyPresident as it makes us just as low as those who did not support President Obama during his entire 8 year run.

I get it, though…

You’re angry.  I’m angry.  I’m extremely angry!  But I REFUSE to stoop to the level of the “other side.” Doesn’t that just divide us even more?

Unless, of course, you make threats on my life and the ones I love.  THAT’S where I draw the line…

Last night, I was not only cyber bullied and threatened to have my head split open, but my personal address was also posted online, inviting all of social media to “protest on me anyway you seem fit…”

First of all, I’m fine.  But I’m only fine thanks to the HUNDREDS of comments, texts, posts, and phone calls I received from friends, family members, coworkers, and even people I did not know.  Even some of this bully’s family members reached out to me to hear my side of the story, and many apologies were made on behalf of this man’s horrific heart of hate.

It took all day, but Facebook has FINALLY removed his post with my address on it, and I have decided not to post his threats against me anymore unless this man needs to be taken to court.  Although, it was interesting to see this man’s business page on Yelp shoot from 1 fake 5-star review to 32 negative 1-star reviews filled with photos of threats this man had made to others as well.

But here’s my question: What have we all learned from this?

After this historic election, I think we have all learned that there is more HATE in this country that some of us have seen or expected.  I’m sure many minorities are not at all surprised by America’s fear against anyone who is different, but if anything, Tuesday was a wakeup call for the rest of us.

I’ve also learned that not all Trump supporters are bad people.  Many of them have admitted to voting for Trump because his tax and other “business” policies will help their own wallets grow, and to that, it angers me that someone’s financial needs can EVER be compared to my equal rights!  In fact, it infuriates me!

If you don’t already know, my husband is originally from overseas.  If our marriage gets revoked under a Trump presidency, my husband would no longer have a reason to live in the Unites States as he is not yet a citizen.  That means he could be deported, and as I REFUSE to leave his side, the two of us could literally be FORCED to leave this country and our friends and family along with it.  I know this is all “woulda, coulda, shoulda,” but as a gay man, I will be living with this fear for at least the next 4 years…

I believe the ultimate lesson here, however, is that LOVE will always prevail.

Just the other day, a friend of a friend made a comment on one of my Facebook posts, admitting that he voted for Trump, but vowed to ALWAYS fight for my rights if they ever get taken away again.  He was respectable.  He was genuine.  He was nicer than some of my Trump-supporting family members simply by reaching out, something many of my family members have NOT done in the wake of these shocking election results.

And then there was today…

After posting about my cyber bullying experience, I received more comments on Facebook in one day than I ever have before, even on my birthday!  My employer called me to check up on me and file a report in my favor.  People I’ve never met before reached out to show their support and simply say: “I have your back.”

So if there’s anything this bully did, he simply made me aware that even in a Trump presidency, everything will be ok.

The world will not end.

Because if there’s one last thing that today taught me, it’s that we have more in common than we think… 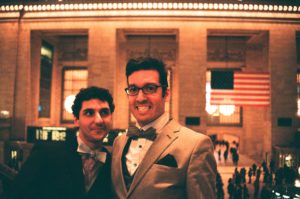