In case you haven’t heard, there’s a new app available for our iPhone and Android devices.  Excuse me if I pronounce it incorrectly, but it’s called Poke–poka–pokaman–awwww, who am I kidding?  I’ve been waiting for this app all year!

And let me guess?  You’re playing it, too, aren’t you?

Now, for those of you wondering: What the hell is a Pokemon?  The answer is actually quite simple. Pokemon is short for “pocket monsters,” and it’s a game that sets trainers on a quest to catch these creatures via digital balls and use them to trade or battle with friends and enemies alike.  Yes, I said balls…

The original games for Gameboy (one of Nintendo’s first handheld gaming devices) started with just over 150 Pokemon (including some that evolved into others), but over the past couple of decades, the world of Pokemon has adapted into 700+ different critters with more on the way later this year along with the new releases of Sun and Moon for Nintendo 3DS.

For me, I was a little too old for Pokemon when it was first released, but my younger brother definitely was not.  He was just the right age to love and memorize all the names of each pocket monster he could catch (#GottaCatchEmAll!), and so, I played to bond with my brother.  But I digress as I, too, quickly fell in love with Charmander, Squirtle, Eevee, and of course, Pikachu.  (If only you were there to witness me catch my first Pikachu at a movie theater the other day, you would have thought I was a five-year-old…)

So why the obsession with this new app?  It doesn’t sound like it’s anything new, rather another version of the same game, right?

Imagine your favorite game as a child…  Go ahead…I can wait….

Now, take that game and put it in a real world environment.  That’s the best way I can describe Pokemon Go.

You’re not catching Pokemon on a imaginary Pokemon island, fighting other imaginary players and unveiling imaginary storylines.  In Pokemon Go, YOU are the trainer!  You have to physically move around the world where these pocket monsters will mysteriously pop up just for you to catch.  Different environments also produce different Pokemon types.  So if I’m near a body of water, I will most likely be able to find water-type Pokemon.  To make the game even more complicated, certain cities and different parts of the world also provide different Pokemon.  In New York City, for example, I can’t tell you how many Rattatas, Zubats, and Pidgeys I have found… (Rats, bats, and pigeons, oh my!)

To make matters even cooler, the game uses certain technology that is brand new to the app field called AR, or augmented reality.  With augmented reality, I not only can catch Pokemon based on my location, but the game can use my camera to make it look like I’m catching them in a real-life environment.  Here are just a few examples of some Pokemon caught in my own environment: 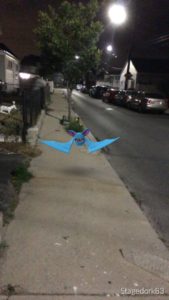 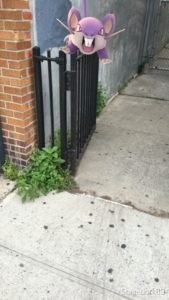 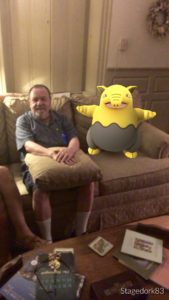 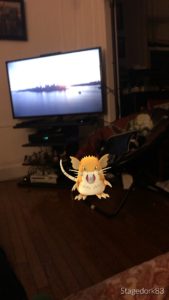 But here’s why I also love Pokemon Go, and I can best sum it up using a direct conversation between my brother and I on the first day of the game’s release:

My brother:  “Josh, how the hell do you move around in this new Pokemon game?”

Me:  “It’s based on your location.  You have to physically move around.”

My brother:  “I want Pokemon LIETHEFUCKDOWN!”

I recently saw a friend of mine who I hadn’t seen in a while, and naturally so because he had his first child only a few months back.  But I must admit, the reason for our meeting was to go hunting for Pokemon.  Now, this friend tends to be a little heavier then most, but when I saw him, I immediately noticed that he had lost weight!  I complimented my friend on looking good and he shared with me his secret: it’s Pokemon Go!

Apparently, every night after he puts his child to sleep, his wife falls asleep soon after.  Normally, he would then head down to his mancave to play video games, but since the release of Pokemon Go, he’s been riding his bike around his quaint New Jersey neighborhood to find Pokemon. Needless to say, it took a video game for my friend to lose weight, but I couldn’t be prouder of him!

Tonight reminded me of another reason why I’m obsessed with Pokemon Go, and that’s community.

When I got home from work this evening, instead of going to the gym, I decided to go outside for a walk around the neighborhood to hunt for rare Pokemon.  My roommate was just coming home as I was walking out the door, and she quickly decided to join me.  So we grabbed our chargers (this app is a battery killer!) and immediately headed for the park down the street.  In the game, there are stops along the map called Pokestops that offer items for you to use in the game.  Most Pokestops are located at historical or monumental locations, with pictures included, and sometimes even information about the stop itself.  There are also items in the game called lures, which you can setup at Pokestops to help lure Pokemon to a specific area for you and your friends to catch.  The park down the street from our apartment happens to have three Pokestops around it, and when someone sets up a lure at one or all three locations, it tends to gather a crowd.

Sure enough, we got to the park where many Millennials had already gathered for the evening, and right away, my roommate and I caught a few Pokemon we had been on the hunt for.  We then decided to continue our walk, when a boy my age yelled out, “Hey, where are you two going?  Can I join you?”  We graciously accepted his company, and before we knew it, my roommate and I had made a new friend.  We must have talked for a solid hour, getting to know each other, discussing the game, and before we knew it, our new friend bumped into another friend that he had met playing in the neighborhood.  It was this fellow that said something that really made me think:

He said, “You know, I’ve lived in this neighborhood almost all my life, and nothing has ever made me want to explore the neighborhood as much as Pokemon Go has.  I’ve met more of my neighbors in the past few weeks than I have in the many years that I’ve lived here.”

And there you have it.  Pokemon Go is bringing strangers together (or in this case neighbors), and I couldn’t be happier that it took a video game to encourage us to leave the comfort zones of our apartments to make new friends.  In a world where hate is being spewed from all corners of the Earth, and the news is filled with nothing but cops shooting unarmed men one right after another, it’s nice to know that little virtual pocket monsters are helping bring communities closer together and inspiring all of us to get our asses off the couch and GO explore the world around us.  Who knows what augmented reality may bring us next, but I just know that Pokemon Go is game I’ll be playing for years to come…