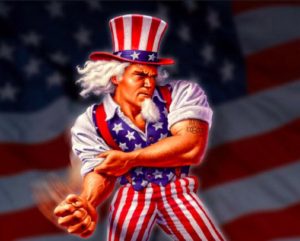 Today was a sad day for America…

Unfortunately, I cannot call us the United States of America because united we are not ever since Donald Dump was “elected” President.

I’m angry!  No.  Scratch that.  I’m fucking pissed!  Fucking furious even!  And you should be too.

What happened today in Charlottesville, Virginia is not just awful, but it is cowardice.  Our forefathers must be hanging their heads in (as they say in Game of Thrones) “Shame! Shame! Shame!”

As a fan of The Walking Dead, I’ve been saying for a while now that the zombie apocalypse is upon us.  No, I don’t believe that people are going to start eating each other.  That is NOT what zombies are.

I am sad to say that our country is being swamped by zombies.

These people are RACISTS!  They are COWARDS!  They are HOMOPHOBES!  And now, they are TERRORISTS!  Stupid. Zombie. Terrorists!

Well, I #RESIST in allowing zombies to take over my country.  OUR country.  Ignorance will NOT prevail.  It never does.  I believe that love will always win against a lack of knowledge.  It is up to us–ALL of us–to educate others in the values of love, tolerance, acceptance, and especially forgiveness.

Go out and educate someone today.  Debate with someone.  Argue in fact.  But don’t just be heard.  Listen as well.  For even Darth Vader came around and brought balance to the force…eventually… We have to at least HOPE that the Darth Vaders of the world who hide behind their cowardice masks of white will learn to love.

The thorns of the rose are clearly visible now.  Let them show themselves.  When these thorns are easily seen, they’re also easier to maintain.  Sure, the thorns may prick us every once in a while because after all, that’s exactly what thorns are; just little pricks.

But a prick does not make a rose.  A stem does.  Roots do.  Pedals form and a flower blossoms.  Be the stems of the world.  Be the roots.  Be the pedals.  Only then will we truly blossom…

One Response so far.