How many of my readers live in New York City?

As some of you may know, living here can be rough, and even that is an understatement.  Any daily commute is crowded.  The subways smell like piss.  Some of the people can be even worse.  So many New Yorkers feel “entitled” simply because they live in one of the most expensive cities in the world, and yet it’s usually the people who didn’t grow up in NYC who come across as the rudest.  Most days of the week I come home from my daily routine and want to move somewhere else–anywhere else–just to escape the hypocrisy that is New York City!

And then you have one of those magical New York City days.  Sometimes they happen once a year.  Some of us are lucky enough to have them once a month or so.  But either way, whenever one of those New York City moments occurs, it makes living here worth all the hardship.

Today was one of those days…

My husband is gone for the weekend.  He’s off to run his first full marathon in the Poconos and I couldn’t be prouder!  But that leaves me to my lonesome back here in the city, and with it being Friday the 13th, who was to say what one could expect on a day like today?

The day started off normal with an early shift at work.  Then I met with my illustrator for drinks to discuss next steps for our children’s book. This is where the magic began!  We have finally decided to self publish our book!  He expects to complete all artwork by July, so hearing this exciting news was already magic within itself.

Then I got an unexpected call from a friend.  His husband is also out of town and he had an extra ticket to see Bright Star, a new musical by Steve Martin.  I had been wanting to see this show, but with Hamilton most likely to sweep the Tony’s this year, I had completely forgotten all about it.  Naturally, I accepted the ticket.

Next thing I new, my life was changing before my eyes!  Bright Star was one of the most beautiful pieces of musical theatre I had seen in a long, long time!  Without giving too much away, this show is about a woman (brilliantly played by the talented Carmen Cusack) who’s past catches up with her present-day self.  I’ve never cried so much at a musical before (and I saw Next to Normal three times, which is literally the story about my mother…), yet also felt so much joy by the time I left the theatre.  I wish Hamilton had come to Broadway last season, or even had waited until next season because I just know Bright Star could win the Tony for Best Musical if it had.

Steve Martin showed up during intermission to play along with the band!  His banjo-strumming fingers were just as magical as I’ve seen him play on TV, and he truly helped make tonight one of those magical New York City moments for me.

As much as Bright Star was a story about our past and present, it was also a beautiful story of that special place we call “home.”  Sure enough, just as the show had ended, as I step out of my seat to exit the theatre, who do I see but an old friend from high school.  Sitting behind me this entire evening had been a friend from home!  I’m pretty sure a day can’t get more magical than that!

Don’t let the bad days outweigh the good ones.  If something is worth it, the good ones should always remind you of that.

Now, for the love of whatever spiritual power you believe in… 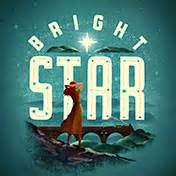