Home » For Fun » I Found a Literary Agent!

I Found a Literary Agent!

Today, I got one step closer to publishing my children’s book!

Wait, what!?  You didn’t know that I wrote a children’s book!?

I actually wrote this story years ago.  One of my best friends had just committed suicide, so naturally, he inspired me to write.  Writing had always been a passion of mine.  In elementary school, I used to have a series called “The Talking Pencil” that my teachers would help me print and bind each year.  I still have those books in a childhood box somewhere…

In middle school, I found out that the Chorus class was taking a trip to Washington, D.C., so I decided to put my voice to good use and then spent years wanting to perform.  I even went to college for musical theatre, and am still struggling to get wet in the New York theatre scene.  But I understand, that takes time for every actor, especially in New York City, the mecha of all actors.

So I went back to writing.

About a year and a half ago, I was at an after party for a cabaret concert, and I met an illustrator.  Without even seeing each other’s work, we knew that we wanted to work with each other right away!  My illustrator sent me links to some of his drawings, and I sent him my story.  We gave each other minor feedback, some of which helped improve my story even more.  He then began working on some illustrations, playing around with character faces and a layout for the entire story, and everything he’s shown me so far has brought tears to my eyes.  I wouldn’t be where I am today without my illustrator, that’s for sure!

Which brings me to today!

We’ve been looking for a publisher for months, and a mutual friend of ours just so happened to bump into one!  She told him about our story, emailed us to make the connection, and today we finally had an opportunity to meet.  This publisher read my story and loved it, as well as the illustrations we had thus far.  He told me that he has since retired from the publishing industry, but is instead now acting as a literary agent for projects and writers he believes in, and he happily agreed to support our children’s book!

How cool is that!?

If there’s one thing I’ve learned in New York City, especially as an actor, it’s that you MUST build a network of people who you not only believe in, but who also believe in YOU!  The only way to survive in this business it so support someone who will also support you.  In this situation, a friend I support made a connection for my illustrator and me.  I wouldn’t have made this next step without the support of my friends, and my only hope is that they know how much I value their friendship.

Now, does anyone know a publisher… 😉 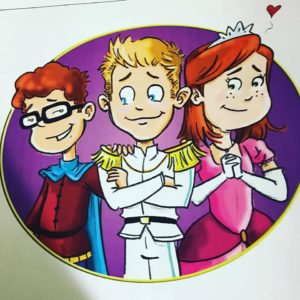