In Loving Memory of Marie Bernard

I had to miss bridge this week.  I don’t like skipping bridge, but every now and then a work meeting comes up, or I have to schedule a meeting with my illustrator (I’m currently writing a children’s book).

This Monday, however, I had to ditch bridge so that I could travel home to Boston…for a funeral.  I know you’re gonna ask me who died, and that’s where this conversation gets tricky.  The woman who died was my grandmother, yet she also was not my grandmother… You see, if you know me well enough by now, you will learn that I have a huge respect for my elders (or as my brother likes to say, “You collect grandparents.”)

As you may recall, our bridge host is 90-years-young, and I do think of her like my own grandmother.  Same went for her husband who passed last October.  He was 95 and his death hit me as hard as when I lost my paternal grandfather almost 10 years ago.

My mother’s parents both passed when I was young, and although I remember both of them, I was never as close to them because they lived on Staten Island.  I live in New York now and I STILL never visit Staten Island, but my family somehow managed to see those grandparents a few times a year at the very least.  My mother also has an aunt, which would make her my great aunt, who’s 90-something-years in age and one of the spunkiest women I know.  She, too, is like a grandmother to me.

I am even still friendly with my grade school music teacher and her husband, my high school theatre producer.  Every summer, my husband and I enjoy a visit to their cottage in the Catskills.  It’s become an annual vacation for us, and I couldn’t be more grateful for their hospitality.

As my last living grandmother, my Memere, well, she’s just a Trump-loving, Fox-news watching, stuck-in-her-ways, 89-year-old woman who I couldn’t adore more.  She’s also shrinking in height every day, so I have to love her before she disappears!

Then there’s Marie and Leo…

How it works is my uncle is my father’s brother (as one usually is).  Their mother is, obviously, my grandmother.  With me so far?  My uncle’s wife, however, also has parents (as one usually does), Marie and Leo.  They are in no way related to me, but I just think most people aren’t fortunate enough to have the opportunity to get to know their cousins’ grandparents.

Growing up, Marie and Leo lived with my aunt and uncle.  They still do, as a matter of fact, and if I’m not mistaken, they live in the same house my aunt grew up in.  My uncle, who just so happens to own a construction company, built an extension onto the house when he and my aunt got married and started to build a family of their own.  Marie and Leo live in the extension of the house.  Or at least Leo does now.  Unfortunately, Marie lost her battle to lung cancer last Wednesday.  It was her funeral I had to attend.

Have I lost you yet?  It’s ok if I have.  I know you at least must be thinking, “So why did this woman matter to you so much?  She wasn’t even related to you…”  True.  But neither are my friends related to me, and I care very deeply for them.

Because Marie was always around growing up, and because my aunt and uncle lived less than a 2 minute drive away from my own childhood home, Marie treated me the same way she treated my cousins: with love and respect, as if I were here own grandson.

Sometimes Marie would pick me up after school because my parents both worked during the day.  I specifically remember this one day when I had to tag along with her on some errands.  Marie did a tremendous amount of volunteer work, as well as took part in many craft groups.  She was an amazing quilter, as shown in the picture below: 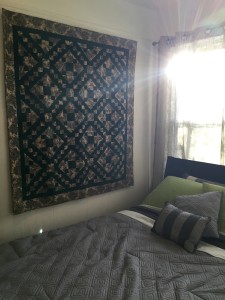 This one particular day, however, Marie began introducing me to her friends and co-volunteers (everyone knew her by name!) as her “adopted grandson.”  As we drove home, I asked her:

“Marie.  Why did you call me your adopted grandson? I’m not adopted.”

“Well then, it’s settled.  I have adopted you as my grandson because I love you just as much as I love your cousins.”

And settled it certainly was.  Marie and Leo were there for me at both my high school and college graduation ceremonies, one of which was at least 600 miles away.  They also attended all of my high school theatre performances, and Marie most certainly didn’t treat me any different than my cousins. She was always quick to scold me for not chewing with my mouth closed (lay off, I was 7!), the same way she would scold my cousins.  Even so, I always looked forward to seeing the both of them at family gatherings, and there were certainly plenty of those.

As for today’s funeral, it was rough.  My aunt asked me to be a pall bearer, and although I’ve served as one before, this particular loss hit me hard.

Last night (bridge night), at least 300 people showed up to the wake. 300+ people! AT LEAST!  I’ve never seen that many people at a wake/funeral before!  My cousin told me today that they ran out of 230 prayer cards by 6pm.  The wake started at 430pm, which is exactly the time we arrived (my father is one of the most precise men you’ll ever meet), and even then the line was already out the door!  I couldn’t believe it!

Well, I mean, I could believe it because Marie was quite obviously a popular woman loved by anyone she met.  Even at 81-years-young, she was still very active amongst her community, once again reminding me to never let age make me feel old and tired.  Marie was a true example of being as young as you feel, not as old as you are…

So why am I writing this?  Marie wasn’t part of my bridge group.  Isn’t this blog about them?

Yes, of course.  But this blog isn’t so much about them as it is about us.  I wasn’t biologically related to Marie.  Nor do I share even the slightest resemblance to any of my brdige-a-teers.  But if there’s one belief I’m sure of in life, it’s simply to be a part of something.  Whether that something be a passion for your religion, a sports team, a musical, or even your basic everyday bridge group, I guarantee that something will help you live your life with greater fulfillment when you’re part of an us.

The easiest something to be a part of, of course, is family.  I know it’s a bit cliche to say that “family is what you make of it.”  Or, “you can choose your own family.”  Marie, however, was sure fire proof for either of those statements.  I didn’t choose to be a part of Marie’s family at first.  She chose me!  But I’ll be damned if I didn’t say I was PROUD to have chosen her right back…

Now, go out there and make your own family.  It can consist of the one you’ve been given.  Or it can consist of only part of it.  Maybe your family will be more friends than relatives.  There’s definitely nothing wrong with that.  So long as you choose your family, I guarantee nothing but love along this long journey we call life.

Thanks for loving me, Marie.  You didn’t have to.  But you did.  And I am definitely a better person because of your love…